Dimension not showing up from View to Layout 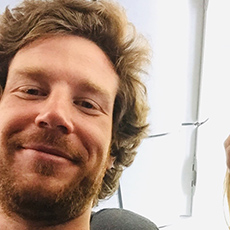 The dimension shows up in the View, but not the Layout, any ideas why? It has the same properties as the neighboring 8' dimensions showing up in both views.

If you place the dimensions after saving the view, this can happen. You have two possibilities to resolve this issue. First and foremost, in the view map, you should have two views with the same name. Click on the first one including the dimensions and go below the view map, you'll find a view with the same name. Put the cursor on it, and make a right click on to redefine it by clicking on "Redefine with Current Window Settings."

The second option is to link the drawing you have in the layout with a right click on "Link Drawing to..." to the view, in the view map, including the dimensions.

Hello, Thanks for the reply.  I looked into that and there isn't  a second view with that same name. I also tried linking to that view without any luck.

There is a another section view that I've renamed, both number and title, that is linked to this same view point, but it has different view settings.

Did you link the drawing to the exact view with the dimensions you want to appear in the layout?

If it doesn't work, save and place the view again into the layout:

With a right click on the view point, you can also control the view settings:

It seems to be that specific dimension section won't show up. I double checked that this is the correctly linked and I placed a new version the same view on the sheet without any changes.

The new nodes on that dimension show up, and eye droppering its parameters and drawing a new dimension string works, when I copy that specific string though using ctl+d + It doesn't show up still.    Not a big deal for this one instance to draw a new dimension string, but I don't want this to happen again for a larger project.

The image below shows the two "missing" dimension strings that, two copies, the others were "eye droppered' and redrawn.