indubhushandas wrote:
So this is another feature request, which is very missing in A-cad. I want to drag/drop any picture - I mean start dragging the picture from any point. Do you understand? If I click on the node which is drawn on picture, dragging mode doesn't activate. This is another feature which is missing. I want just press some hotkey like G ("grab" like in Blender, modelling program) to start dragging.


Have you tried the default keyboard shortcut for drag? - CTRL+D

indubhushandas wrote:
Next. I want "transparency" of walls. Why? Because I draw walls over picture, and walls are filled with colors or some patterns, but they are unable to be made "transparent filled". This is very bad, that this feature is absent.


You will want to look at Graphic Overrides.
You can set a rule for "All cut fills to transparent" - I think it should be there already in a default template.
This can be set to override cut fills with an empty fill with a transparent background.
Then use that rule in a GO combination.

indubhushandas wrote:
Yes, one feature I forgot to tell about. It is "layers grouping". When we use modules, the layers (of one "module of variant N") are kind of grouped into "over-layer". But layers must also have hierarchy. So that we can easily group layers into groups, and quickly hide/show groups of layers. Because when there are many layers, it becomes hard to manage them all.


Not exactly what you are looking for I know, but you have layer combinations to turn on/off groups of layers.
You can have as many combinations as you need.

indubhushandas wrote:
Our main architect draws first the sketch on paper. Then it is scanned (maybe in two parts, a4*2, or one a3 paper format), and added as background image on separate layer. Later we have to draw lines over the drawn walls, windows, doors and other objects. Sometimes it becomes a challenge and boring thing to do. Because some features are missing in Archicad to simplify it all. In fact... If I were Archicad developer, I'ld make a separate program, in which architect could make sketches, but which would be then easily added to Archicad program. Because our main architect feel Archicad is too complicated to do all the work directly in archicad. He prefers to draw on paper (as in old good times), and then someone has to "synchronize" that picture on paper into Archicad

indubhushandas wrote:
Also... If you'ld have a feature to draw on touchscreen with a pen - it would be cool! Please add this feature in Archicad! our main architect has "Tablet" PC, Windows with touchscreen and a pen, but we can't use all the power of this hardware in Archicad. What we need is to be able to draw with a pen over Archicad plans, both in 2d and 3d.

What do I mean? Well, in Archicad there must be a feature to draw with a pen (on smart-phones it is a stylus or simply finger-touch) over archicad plan. Why? because for artist, it is easier to draw abstractly from all those walls, doors, windows etc. Main architect uses lines. Just like there is in non-digital world - a pencil, a paper, an eraser. A ruler. Yes, there must be a ruler attached to a "pencil" feature in archicad. say, architect turns on/ activates "pencil" tool, and starts drawing something. So, when he draws a line, there maybe some length of line to be shown - if it's straight, or if it is not straight, then there must be still length of line, but a curved line should be also - vector line. It should be some vector editor, with vectorizer of drawn things on touchscreen.


You are looking for a program which will vectorise a hand sketch?

Though it might be handy, it would require some extremely complex AI to interpret what is on the page and if it interprets a line wrong, I can see it becoming more of an issue than it is worth. 1 mm error on paper at 1:100 can create a huge amount of error in any CAD work if not adjusted for.

While AutoCAD has tablet functionality and a way to draw free-form lines which can be brought into ArchiCAD as vector lines, the issue here is that precision lines are not suitable for sketching.

If it does not need to be a vector, and all you are after is to be able to draw on the computer, use something like Photoshop or Corel Painter. Buying an extra ArchiCAD license just to do hand drawings sounds like a huge waste of money... Drawing / painting on a computer feels very different compared to paper and some people find it hard to adapt. The closest thing would be to invest in something like a Wacom Cintiq.

The one thing from this huge block of text I would take, would be the ability to do quick markups on a drawing with a stylus.

indubhushandas wrote:
So, to convert paper drawing of house plan into Archicad, we do that in "old fashioned way". If I put a picture into Archicad, turn on transparency, I have to add some "nodes" unto picture. I'll explain now what I mean.

Over the picture I draw some lines, intersections of which, or corners, would be "anchors". Then I group all that with picture. Then I can select a node, and move a picture anyway I want.


This sounds like a waste of time to me. Why can you not just draw walls over the sketch rounding them to nice lengths?

Help Those Help You - Add a Signature
Creating a Thread

All right, thank you. I've learned now two things, which I'll use now:
- hotkey for dragging a picture (from any point I click) - this is what I was looking for
- and setting "graphics overrides" for walls. I have an option to make a "view' , and in "model view options" I select "05 ceiling plans", while setting "showing constructions" to "only core". This partially solves the problem.

Now I see only outline/contour of walls. I can set their outward color, and colors of internal lines (which show borders of doors/windows). That's good. But I'ld like to show some half/semi-transparent colors for fills of walls also.

And, colors of picture, which is in background often mix with colors of objects in Archicad. I mean if on paper a wall is drawn in black, then in Archicad I also have walls painted in black...

So i decided now to put the picture in Photoshop, to selectively change/tweak some colors. like setting black to become violet, red to become yellow, make clearer white/background (color of paper).

Now it is more usable. 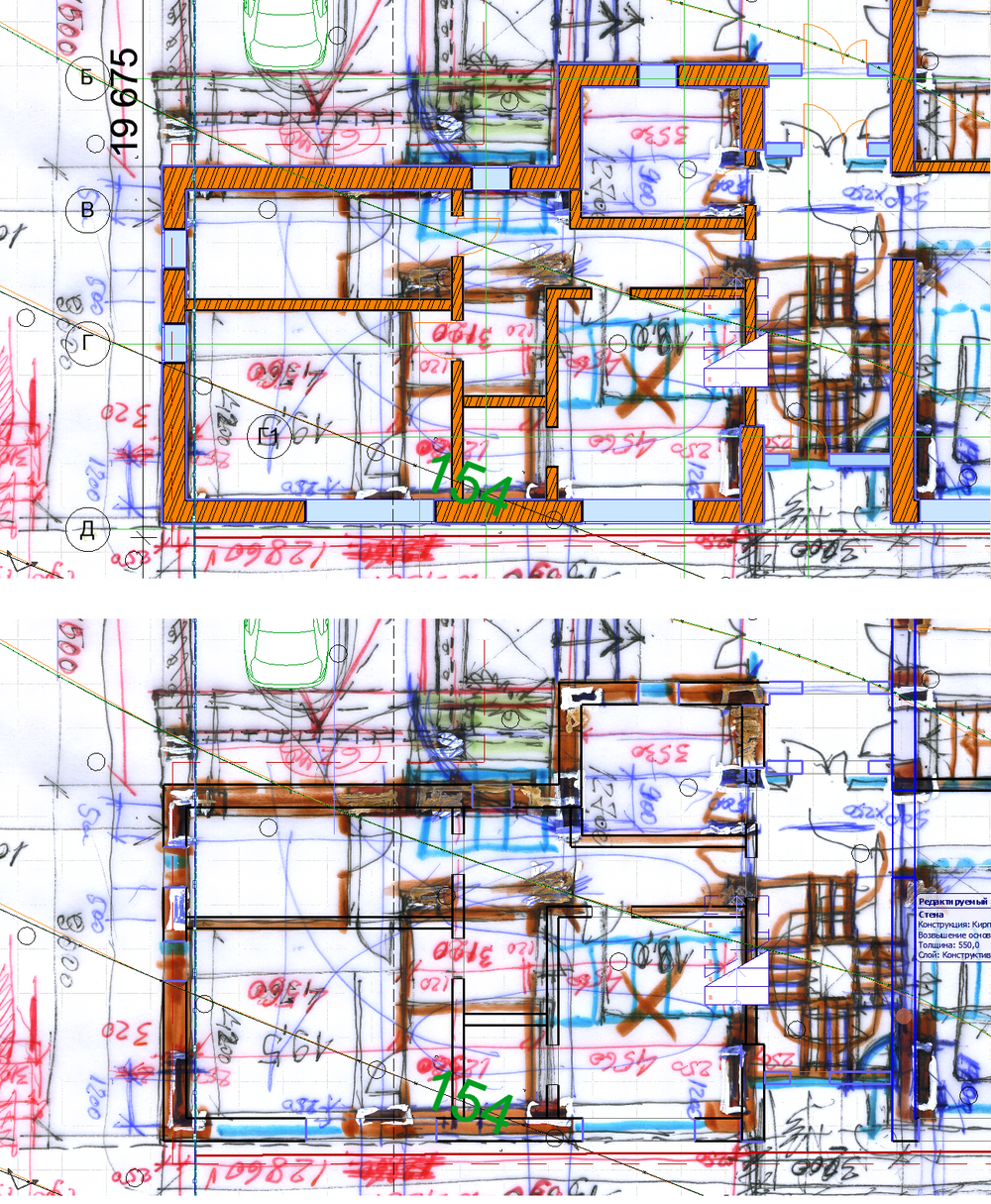 This is a printscreen/screenshot of what was before, and second picture - what I achieved now.
0 Likes
Share
Reply

indubhushandas wrote:
Now I see only outline/contour of walls. I can set their outward color, and colors of internal lines (which show borders of doors/windows). That's good. But I'ld like to show some half/semi-transparent colors for fills of walls also.


You should be able to create walls with a % fill (rather than solid or empty) so they wii be semi-transparent.
Or you can set your graphic, override rules to use a % fill.

indubhushandas wrote:
And, colors of picture, which is in background often mix with colors of objects in Archicad. I mean if on paper a wall is drawn in black, then in Archicad I also have walls painted in black...


You will want to look into 'Trace & Reference' for your background images.
Place them in another storey or a worksheet.
And then set them as the trace reference.
You can control the colour, transparency and you will also have splitters at the side of the screen so you can peel back the model and see the trace underneath.