Trusting in The Impossible 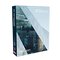 In 2003 I was working at a firm that was challenged with applying for and receiving a Change In Use approval from the local Zoning Board for several acres along the Ohio River just East of Downtown Cincinnati Ohio. The restrictions on the site were that any development could not obstruct the views from sites uphill from the property. The owner of the firm came to me to create illustrations of numerous viewpoints that would support the Change of Use. I had been a user of Archicad for 5 years at that point, but had never delved into the GIS world or any landscape of any large scale. I kept trying to convince my employer that the simplest method would be to superimpose images of an Archicad model over actual photos of views, but he insisted that a computer model be used to allow the flexibility in choosing the views. Not knowing how I would be able to show the overall context of the site, I set about to at least model the immediate site and a portion of the neighboring area while experimenting with US Geological Survey Digital Elevation Maps. With the meager amount of RAM I had at my disposal, I was able to convert about three miles of the Ohio River Valley into a 3D mesh and texture it with satellite photos. (The company that was developing software that would eventually become Google Earth was doing the exact thing, but was not publicly available at the time.) I was then able to merge the larger model with the more detailed model and then went on to render the movie and the examples of the still images attached along with a Quicktime VR that helped present the multiple model viewpoints needed to support the Change of Use request. While the unknown outcome was at first daunting, the thrill of feeling like you were on the cutting edge was exhilarating.

Most liked authors
View all